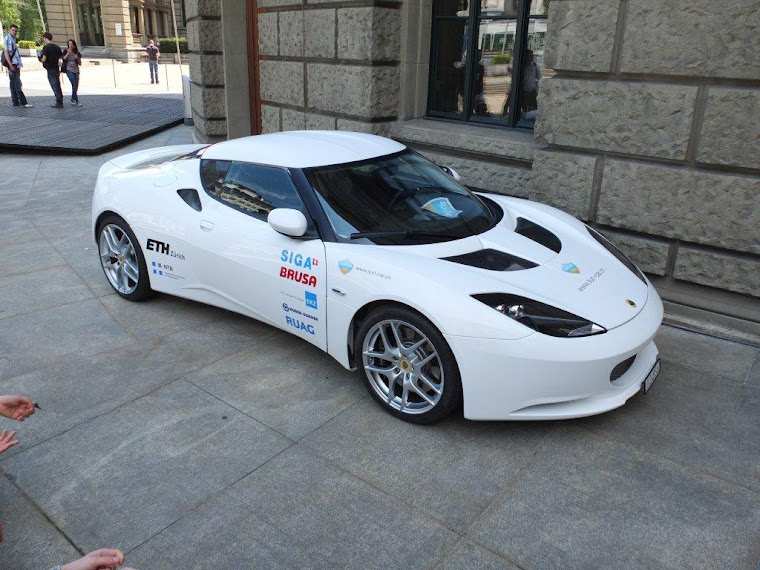 Even few more hour of sleep still didn’t help to get out quicker of the warm and cosy bed. Therefore we missed to be on time at Bad Pyrmont… The last free plugs were at the end of the row of all cars. Like for the punishment our car got there less visual awareness. However the time went on, more and more people walked to the Suncar and adore the electric sport car. An old skipper had told us his whole life story, started by building the first vehicles with a fuel cell to his sailing adventures over the Atlantic...  A while later we remarked that almost everyone has left the place!

Insertion: Since days we were looking forward to go to the bath at Bad Pyrmont. It was announced, that we will get there by a shuttle bus. As a short and painless conclusion we once again were too late to catch the bus…

Our new program was: charging, waiting for lunchtime and leaving on time! The cars were parked in front of the Phoenix Contact building. Suddenly before lunch many international business guys surrounded very interested our electric cars. They enjoyed their short break of the meeting until we invited them all to do together the waving. The lunch, which we got in the Phoenix’s canteen, was just great!

We left about 1pm and drove on the shortest way to the big event in Osnabrück. There arrived, all cars need to charge for the 50km long rally stage. 30 points could be scored for driving skills with the vehicles. We tried the best, but we hadn’t a real chance against the other cars, with more agility and a bigger view field and versed drivers...

Back in town we need some refreshment for the last and longest stage of the day with 132km. Finally we arrived in Leer and found a pub, which was still open and where we got a cold beer before we jumped in the beds.
Eingestellt von Unknown um 13:47 Keine Kommentare:

In the early morning we were on the way to Marburg, Elisabeth-Blochmann-Platz. Blue sky, a nice sunrise and the view of the university city made the arriving pleasant!
We booked the “standard city tour” and were bored for the next hour, in which the highlight was a cute girl cleaning the window in her room – thanks again Gordon ;) To sweeten the city-tour we bought some delicious grapes on the marketplace. The price says pretty much everything about the lunch. (2.50€) No, just joking, price/performance was fine…
In Rosenthal we visited the TWIKE Company and saw the well organised production place. We enjoyed the tour like the Streuselkuchen, which indeed was very good. For us it was a short stay, we left Twikes birthplace early to get our new rear tires. By the way, thanks for the tip Wolfgang.

In the garage we left nearly 400€, two black stripes and our sense of hearing. Later on we passed a lot of windmills and thought about a project Windcar. Wind and weather helped to get some great photos.
Directly beside the marketplace (in Paderborn), where the cars rested overnight, we had our dinner, served by Dessert. At the hotel reception the lady surprised us with two different room keys (for single bedrooms). Alone but tired we fell asleep.
Eingestellt von Unknown um 07:00 Keine Kommentare:

As usual we got up a little late and therefore had to run through breakfast buffet, making some sandwiches for the road. After three cycles around the police underground parking area (thanks to the GPS), we headed to our first stop in Karlsruhe at the KIT (Karlsruhe Institute of Technology) Campus. A lot of Students and even the city major – who enjoyed a ride in the zero-tracer –came to greet and visit us.
We had a short guided tour through the automotive part of the institute, where they have the possibility to play with a remote controlled Porsche.

We planned to make a pit stop at a.b.c. Reifen in Mannheim. Not like discussed on the phone, they weren’t able to offer us the desired tires. We decided to go directly to the Wasserturm and disarrange the tire change.

Whilst charging the vehicles we took some photos with the beautiful water play in the background. 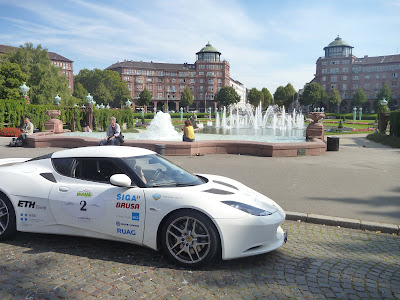 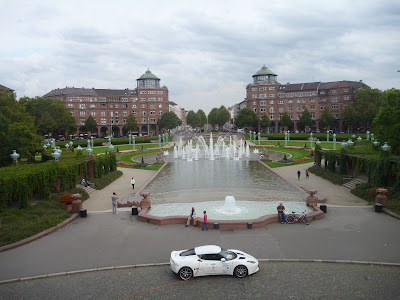 At 5pm we departed to our overnight stay in the small town Oberursel. The announced dinner showed up as bread & sausages, something we hadn’t eaten for weeks...
Team E-Wolf and others helped the wavers getting to the hotel, which was about 4km far away. Nearly everybody was assembled in the lobby to use the WiFi connection, what turned out to be too much like the Sankt Gotthard for the MIA!
Eingestellt von Unknown um 06:49 Keine Kommentare:

Time : 10.15 AM, place: Eimeldingen, Reblandhalle. Focussed like an eagle on its prey I wait. There comes the signal, the acceleration pedal hits the floor and the SunCar goes crazy!

The performance of our car allowed us to win the daily competition:  acceleration race. We enjoyed the breakfast, which we brought along from the hotel. Afterwards we headed for the next stop in Freiburg. There the sheets for the energy efficiency contest were collected by the jury. We didn’t expect too much from our results, so we were really surprised by our good result, the second place. The explanation laid in the weight of the vehicles, which were included in the calculations (Consumption of kWh per 100km per kg).

The trip to Schramberg was very exciting. We drove over the beautiful mountain roads of Schwarzwald, and as a result of that we now have to change our rear tires... Haha, just joking! It was already necessary before this last trip.

We managed the 90km to Strasbourg without any problems, except for a sleepy co-driver. But once arrived we were captured by the beauty of the city and all the belles filles…

After a dream which felt almost too good to be true, (maybe the beautiful host lady played a part in it…) we got up and took a seat in the Suncar. We arrived about half past nine in Basel at the Auto Basel exhibition. A lot of electric and hybrid cars were showed to raise the awareness of electric mobility to the unknowing majority.

For the WAVE participators Sunday was announced as day of rest.

In the morning we went through the areas of the exhibition, where Douglas Peck (check out his blog at http://www.emotorsportnews.com/) explained us the beauty of a true English car – the legendary Aston Martin. For lunch we enjoyed some typical Swiss food - hamburger with chips. A few wavers left to visit the city of Basel…

Finally Roger is back! Together we met for the way to Eimeldingen, where we got the possibility to charge the SunCar. Eimeldingen – we all knew what this meant. It would be our first trip to Germany, where we’d have highways without speed limits. A coin flip decided about who will drive, and Stefan won. It was just a really short trip on the highway, where we goaled a top speed of 180km/h.

After placing our stuff in the hotel room, we drove with the C-Zero and our driver Patrick to the wine cellar, where we were served with so called new wine, which went down our dry mouth like water. The owner of the wine cellar offered all drinks and we spent a great time talking!

Afterwards we went for a drive with our Bugatti Veyron. After a few minor crashes and one final frontal hit, we decided it was too late, and we stopped playing need for speed.